The trophies for both the HAPO Columbia Cup race held in the Tri-Cities, Washington, and the HomeStreet Bank Cup held in Seattle were both awarded to J. Michael Kelly and the Graham Trucking team, but those victories only tell part of the story.

The trophies tell us that Kelly was able to win when it counted, during the running of the winner-take-all final heat in both cases. But that
story overlooks the fact that Jimmy Shane and the Miss HomeStreet still remained at the top of the field. 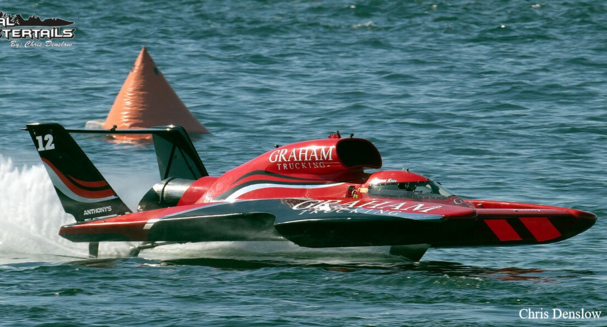 The Graham Trucking team after the Seattle victory. 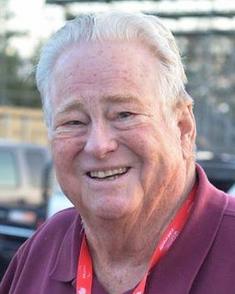 Kelly wins another, after most fans had gone home.

The season’s largest field has a race with no injuries,
no collisions, and no controversies in the Tri-Cities.

Qualifying with the fourth fastest speed was Jamie Nilsen, who had just been named the week before as the new driver of the U-11 J&D’s presented by Reliable Diamond Tool. He qualified at 154.588 mph. Next at 152.021 mph was Jeff Bernard in the U-1918 Oberto Super Salami, the former Miss HomeStreet boat that was making its first appearance of the season.

For the complete September issue and all our regular features, click here.

As is becoming the norm on the H1 circuit,

the largest field of the 2019 season was

the one at Tri-Cities, Washington. After
Friday’s qualifying, nine of the 10 boats had

done at every race so far this season, was

Jimmy Shane in the U-6 Miss HomeStreet,

mph around the Columbia River course.
Second fastest when the qualifying had 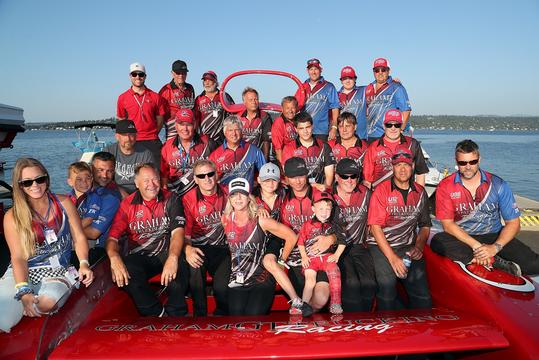 this was their second time making an appearance at Seafair. Meanwhile, Seattle Outboard Association brought three
rookie drivers in attendance. The young JSH drivers, starting at the young age of nine, were excited to race at Seafair, a race
they had been watching for many years.

Most of the little hydroplanes were dressed up to match the H1 unlimited hydros and the unlimited drivers were there at the side of these young drivers to give them tips, offer advice, and cheer them on. Many of the Seafair fans swarmed the junior pits with curiosity. The JSH drivers and crew were quick to sign autographs and answer questions.

The previous weekend’s winner of the HAPO Columbia Cup in the Tri-Cities, J. Michael Kelly and the U-12 Graham Trucking, fell to third in qualifying with a speed of 148.450 mph. “We are happy with a third place,” he said. “Faster is always better but we will be there.”

Jamie Nilsen, driver of U-11 J&D’s presented by Reliable Diamond Tool, made two attempts to leave the dock during morning testing, but was forced to shut down and be towed back to the pits due to fuel control issues. The team would later resolve the issues and qualify at a speed of 147.266 mph, putting them fifth in qualifying.

For the second year in a row, the
junior stock outboard hydroplanes
(JSH) hit the water with a full fleet
of 12 boats. For some of the drivers,

Jimmy Shane and Miss HomeStreet were the fastest qualifier at 163.573 mph.

Bill Doner, one of the most colorful characters in motor sports and a former commissioner of the Unlimited Hydroplane Racing Association (UHRA) passed away on August 16 at the age of 80.

Doner gained his fame as an enthusiastic promoter of drag races up and down the West Coast. His radio ads promoting “64 Funny Cars” at Seattle International Raceways were well known by anyone who listened to radio in the Seattle area during the1970s.

His contribution to the sport of drag racing was so great that he was inducted into the International Drag Racing Hall of Fame in 2012. 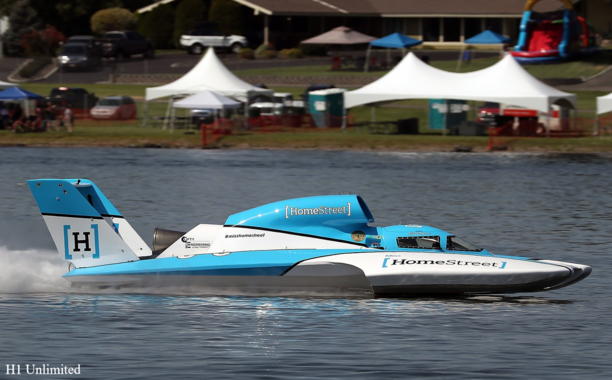 AN EDITORIAL OPINION:
Final heat fiasco in Seattle:
A call for change.

After the final heat in Seattle, three teams asked for a driver’s representative and the race finish was under review. A half hour after the race, there was the scheduled award/trophy presentation on TV and Jimmy Shane/Miss HomeStreet awarded the win. About an hour later, all was reversed, and J. Michael Kelly/Graham Trucking was declared the winner. What an embarrassment for all parties. Screw ups like this have a negative impact on public relations for race sites and their sponsors, and for race teams and their sponsors; it impedes fan building and infers H1 incompetence.

Executive Director Ron Perry, H1 board members, public relations contact Owen Blauman, and H1 Chief Referee Rick Sandstrom are all accountable, as any of them should have interceded before the scheduled award/trophy presentation.

The fourth race of the season saw a fleet of eight H1 unlimited hydroplanes make their way to Stan Sayres Pits in Seattle for the 69th year of racing on Lake Washington. For the first time, Seafair’s title sponsor was HomeStreet Bank.

Friday morning’s testing and qualifying on the two-mile course was blanketed with overcast clouds and a slight wind, which made qualifying a challenge for many of the drivers. “Conditions are not ideal,” said Jimmy Shane, veteran unlimited driver of the U-6 Miss HomeStreet and the top qualifier with a speed of 154.513 mph. Andrew Tate was nearly five miles per hour slower, qualifying at 149.120 mph in the U-1 Delta Realtrac.

The sport mourns the passing of Bill Doner.

Controversy once more in Seattle.
For the third year in a row, the winner
wasn’t the first boat to cross the finish line. 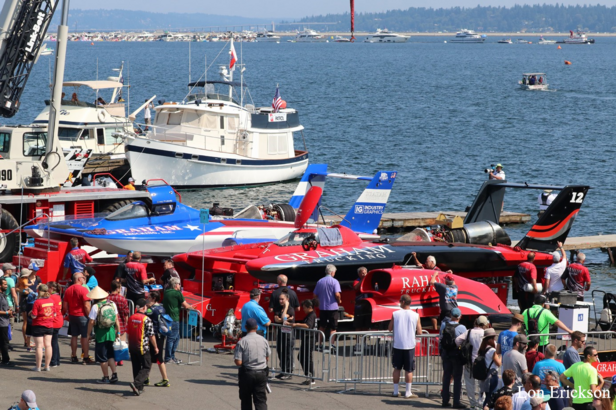