Things weren’t so bright for everyone, however. Pride of Pay ‘n Pak had started the season with six Chrysler engines and was now down to two, after blowing one during a Wednesday test session. Owner Dave Heerensperger was talking about installing a Merlin in the craft.

Brien Wygle at the controls of the Thriftway, Too in 1957. 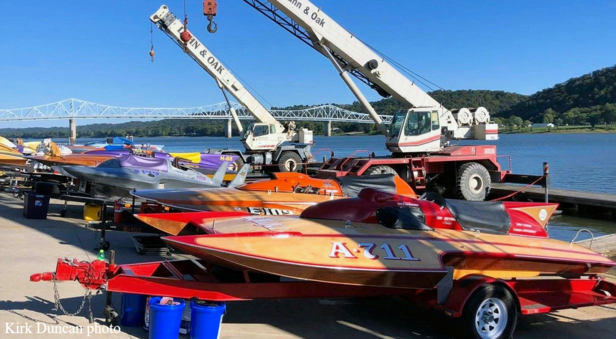 We’re living in odd times due to the COVID-19 virus, but a September weekend in Madison, Indiana, was just what the doctor ordered. It brought back some sense of normalcy for boat racing fans with the running of Madison Vintage Thunder.

The event was run in memory of Jean Johnson, the wife of 5 to the 5 Vintage
Hydros co-founder, Dave Johnson. Jean
passed away earlier this summer. Dave,
who also runs the F-128 Miss Jean vintage hydro, said, “I feel honored about that.”

Some of the vintage inboards that took part in Madison Vintage Thunder.

The star of the show was the U-36 Miss U.S. IV, which took several runs around the course during the two-day event, with Mark Weber behind the wheel.

A field of 14 Unlimited hydroplanes, the largest so far of
the 1970 season, competed in the Seafair Trophy race held on August 2. Action started on Wednesday with testing only, then the time trials started on Thursday. Boats that had competed earlier in the season were not required to qualify, but prize money was awarded to the top three boats on each of the three days.

Notre Dame, with driver Leif Borgersen, scored the highest lap speed of the week on Thursday at 117.391 mph, followed by Bill Muncey in MYR Sheet Metal at 116.129 mph and Tommy Fults and the Pay ‘n Pak ‘Lil Buzzard at 112.500 mph. Notre Dame again scored the

Remembering
a famed pilot
and a true
gentleman
who drove
hydroplanes.

more power than the Allisons he had planned. And it was a pretty good boat.

I was new at racing, and the boat was new. That is what he wanted. He was afraid that an experienced driver would get in and be very critical of it. I think he was concerned about that. That’s the course he chose to take.

As an aviator, was it difficult to adapt to
driving a race boat? 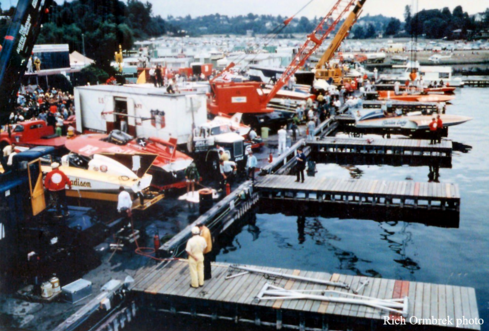 No, not really. I think Ted felt that there was room for improvement. Although he knew that he’d produced good boats in the Thriftway and Wahoo and Miss Spokane, he felt there was an opportunity to use a little bigger boat. He liked the idea of putting the driver up front. Initially, he thought he would put two engines in it. But two engines were not very successful, he found, and midway through the development of the boat, he decided that we’d go with a single RollsRoyce, which could produce

“We had to get out of the house and
missed our hydros this summer, so this
was perfect, and the weather is great,” one local Madison resident explained with a smile on their face. “I haven’t sweated once,” another fan was heard saying, noting the cool temperatures compared with those in early July when the hydros typically appear in Madison.

Fans also loved seeing the Miss HomeStreet display hull and the Madison Regatta display hull, decked out in 1971 Miss Madison colors. Both were parked on Vaughn Drive as fans stopped to take pictures.

A publicity shot for the Associated Grocers Thriftway team in 1957. Brien Wygle is driving the Thriftway, Too (bottom) and Bill Muncey is in the cockpit of the Miss Thriftway.

A weekend of hydros, just
what the doctor ordered. 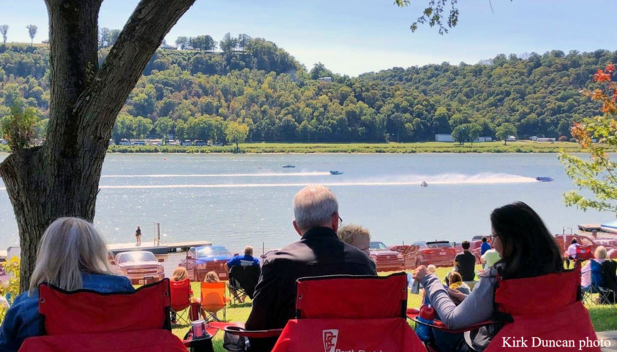 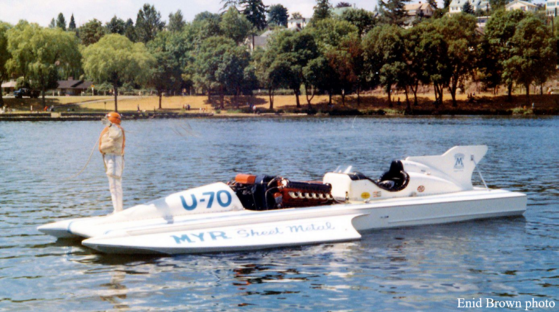 So, Russ Schleeh put in a good word for you?

Russ Schleeh introduced me to Ted, and Ted said he would give me a try. Actually, I competed against a couple of other potential drivers when we first put the Too in the water. But after some months of doubt and competition, Ted finally selected me, and I went on to drive it for the next couple of years.

To get qualified for Gold Cup I had to get in more heats. So, I managed to get in and drive a limited for one race that had been built in fact by Ron Jones, who was Ted Jones’s son. And Ron arranged for me to drive in a limited race. It was in what we called a 266-cubic-inch boat. Anyway, that qualified me for Gold Cup in 1957, and after that I was qualified for everything.

Was the Thriftway, Too meant to be a backup
to the Miss Thriftway?

UNJ: As your career unfolded, you were
best known as an aviator.

So how did you get selected to drive
the new Thriftway, Too in 1957?

By good fortune, I guess. I had no experience, but a good friend of mine, Colonel Russ Schleeh, was an Air Force test pilot. Russ was invited by Ted Jones to try out for driving. Russ liked it and Ted liked his driving. He went on to drive Shanty and did very well with it. Meanwhile, Ted Jones had designed, for Associated Grocers, the new Thriftway, Too. The boat was radically different because for the first time they were putting the driver in the front of the boat, ahead of the engine. Ted felt that a traditional driver would not do a good job of turning the boat. He said, “You know, they were so used to having that boat in front of them.” Whether that was true or not, I’m rather doubtful. But in any case, he said he wanted a driver who was not experienced. I approached him.

Brien Wygle, who passed away on September 15 at the age of 96, was a true gentleman. The first time we met, he invited me to his beautiful lakefront home in Bellevue, Washington, where we talked for over an hour about what it was like to drive Unlimited hydroplanes in the late 1950s. Wygle is best known as an aircraft pilot. He was chief test pilot and director of flight testing for the Boeing Company, and retired in 1990 as Boeing’s vice president of flight operations. He flew the 727 on its maiden flight and was co-pilot on the 747’s first flight. But our conversation that day in 1997 was primarily about driving hydroplanes, as he warmly welcomed my curiosity and my questions.

The national points leader, Bill Muncey and the U-70 MYR Sheet Metal.

The ages of these vintage drivers varied from the 20s all the way to the 80s, as did the boat names and classes of hydros. At 83 years old, and the oldest driver in the pits, Bill Edwards brought his Chrysler-powered 1937 Dennis Point Menace outboard from Maryland.

The U-80, a craft that raced the last three years as Parco’s O-Ring Miss, attracted much attention when it appeared in the pits on Friday morning having been towed up from Southern California behind an antique Beverly Hills fire engine. It had the name Super Cinders II when it arrived, but by Saturday a sponsorship deal was reached with a Seattle catering firm and the boat was renamed Miss Van’s P-X. Less than an hour after acquiring its sponsor, well-known California limited ace Mickey Remund qualified himself and the boat for Sunday’s competition.

When the fleet of Unlimited hydroplanes rolled into Seattle 50 years ago this past summer, the outlook for the national title chase seemed well in Bill Muncey’s hands. Driving the MYR Sheet Metal, he had won three of the season’s first four races. Yes, his team had a hard time two weeks earlier in the Tri-Cities; he finished only one heat. But his closest rival, the defending champion Miss Budweiser with Dean Chenoweth driving, had an even worse outcome. The boat had flipped and was fished from the depths of the Columbia River with serious damage.

Owners came from all over the eastern half of the country to run their vintage hydros, most for the first and last time in 2020.

While the vast majority of hydro racing in all classes had to be canceled or postponed this summer, the 5 to the 5 Vintage Hydros club persevered and, with the blessing of the local health department and state officials, held its fifth annual event as scheduled. It was only one of a handful of race sites that held racing events this summer.

Optimism abounded on Sunday morning. Bill Muncey came into the day 720 points ahead of the Miss Budweiser and 780 points in front of Notre Dame. Muncey was confident he could lock up the national championship, perhaps even in Seattle.

Twenty-eight vintage inboard and
outboard hydros filled the pits along the
Wild Bill Cantrell Memorial racecourse
on the Ohio River in Madison.

The headliner was the 1957 Henry
Lauterbach–built U-36 Miss U.S. IV Unlimited hydroplane. Rarely raced after
it was built, and sitting dry docked for many years, the boat is now hitting the vintage circuit anytime owner Jay Armstrong is able.

“Crank ‘em up!” was heard often from PA announcer Jeff Ayler during the two days as the green flag was waved. The
piston-powered vintage engines growled

For the complete November issue and all our regular features, click here.

Miss U.S. owner George Simon and driver Salt Walther also were optimistic, with Simon quoted as saying they had a 50/50 chance of winning. Laird Pierce felt that changes made to his new Parco’s O-Ring Miss after Tri-Cities had improved the chances of competing with the top boats, while driver Billy Schumacher said the boat was “riding perfectly.”

And, Bud owner Bernie Little, remembering
the previous year when they had come into the
Seattle race trailing badly in the national standings only to win both Seafair and the San
Diego Gold Cup to claim the national title, was
looking forward to history repeating itself.

top speed on Friday while Dean Chenoweth was second fastest on the newly repaired Miss Budweiser, which had arrived in the pits on Friday morning, only 12 days after its disastrous Tri-Cities accident. Burien Lady, driven by George Henley, clocked the third fastest time at 94.737 mph.

On Saturday, Notre Dame once again sat atop the leader board, but this time had to share the honors with MYR Sheet Metal, as each had lapped the course at 116.883 mph. While it was not necessary for most of the boats to qualify for the race, one entry was making its 1970 debut and was required to meet a minimum standard.

Fans gathered on the shore of the Ohio River on a sunny day to watch vintage hydros. 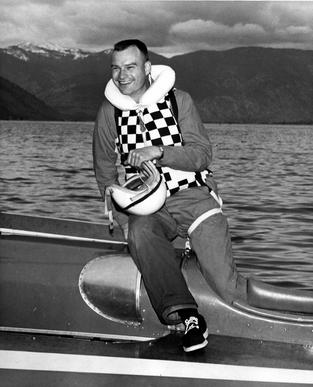 to life and piston sounds bounced off the Kentucky hillside on the backstretch as the old-time boats toured the Cantrell
racecourse, much to the enjoyment of race fans who made their way to downtown Madison.

Two picture-perfect weather days with bright sunshine and blue skies greeted the owners, drivers, and crews. And, the water couldn’t have been better for the exhibition racing of these classic vintage hydros. 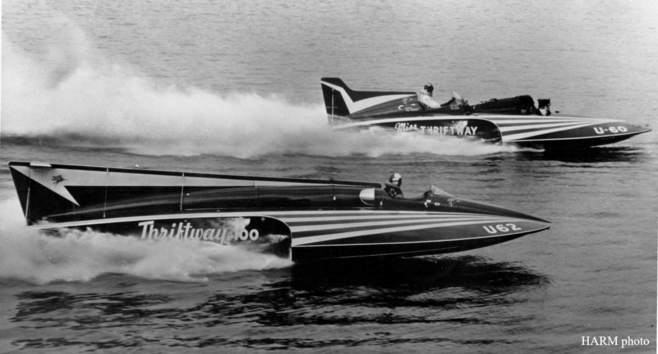 Parco and Schumacher had the inside lane at the start of Heat 1A. Jim McCormick and Miss Madison were in lane two, and Muncey and MYR Sheet Metal were in lane three. Entering the first turn, Muncey moved over in front of Madison, officials ruled an infraction, and Muncey was penalized a lap. McCormick went on to victory followed by Ron Larsen in the Pride of Pay 'n Pak, Parco, then Bob Gilliam and Atlas VanLines II. With the penalty, Muncey finished fifth. 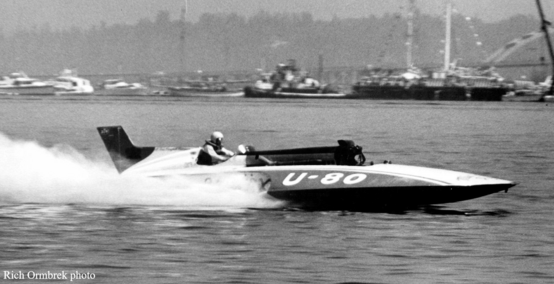 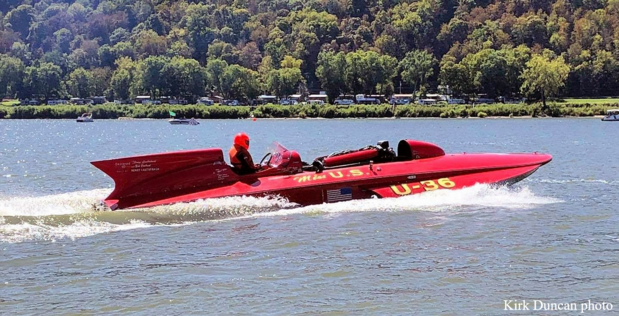 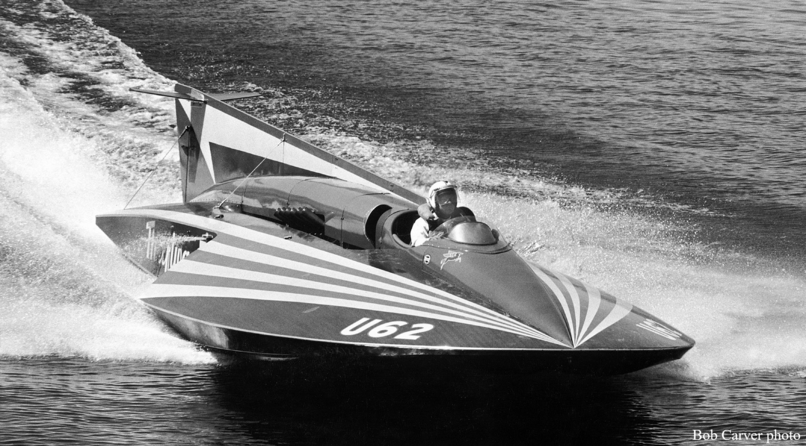