Over the years, the Hydroplane and Race Boat Museum’s Mahogany and Merlot event on Lake Chelan has grown in size and in local interest. The 2019 renewal attracted 11
vintage Unlimited hydroplanes, two vintage Grand Prix hydroplanes, plus close to two dozen vintage inboard boats.

The weather was crisp at night with hints of fall in the air. Daytime, however, was sunny and pleasant. On Saturday, a breeze put ripples on the water, but conditions were ideal on Sunday. The winged Pay ‘n Pak and the 1962 Miss Bardahl were pitted across the lake from everyone else so there would be adequate space for a crane to lift them in and out of the water.

The original schedule did not have the boats touching the water on Friday. A revised schedule included a testing period from 2:30 p.m. to 4:30 p.m. To
increase the length of time that boats
would be on the water, the drivers were told by the referee that only one boat at a time would test.

After the Seattle race, there was a lot of speculation about what boats
would be in San Diego for the season ending race. One story had the Bayfair directors wanting only the top six national high points boats to be there. The race would be described as “The Race for the National

We love to hear from our readers.

Last month’s comments about the starting procedure caused several readers to respond, including a boat owner and a former race site chair. Here’s what they say: 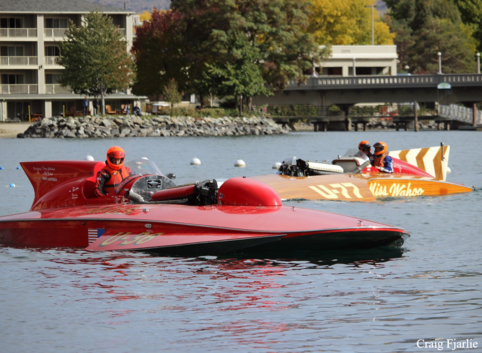 In last month’s column, I discussed the subject of starting an unlimited hydroplane race, a process that has seemed to elude the sport’s officials for well over two decades. I reviewed the various methods that have been tried and offered a suggestion that might simplify what happens before the starting gun fires and that might make watching a boat race more understandable for the fans sitting on the beach.

In short, I suggested two changes: to greatly reduce the amount of time that passes from when the boats can leave the pits to when the start happens, and to require the boats to circle the course at least once during that starting period. The idea was to eliminate the possibility of a driver slowly creeping along before the start in order to grab the lane that he wants.

My suggestion was offered from the perspective of a fan who has been watching the start of hydroplane races for more
than 60 years. I’ll admit, it’s a perspective that is highly influenced by what I remember racing to be like back in the olden days.

I concluded my thoughts with a call for others to offer their opinion. I said that I especially wanted to hear from drivers. And, so I did.

I had a long discussion about the issue with one of the most successful drivers this sport has ever seen, and he helped me learn a few things. I learned that my perspective of racing might need some updating, for example. He told me that the
conditions that today’s drivers experience are vastly different from those seen by Bill Muncey, Dean Chenoweth, and the other heroes of yesteryear.

Back in those days, the starting procedure called for the boats to remain “on a plane” during the one-minute period before the starting gun fired. It was during this time that a chess match was played as drivers maneuvered for their preferred lane. The rule of staying on a plane could be easily enforced because it was easy for officials to see. The old shovel-nosed hydroplanes didn’t handle slow speeds very well, it took them a very long time to get up to speed, so there was a big difference between a boat that was on a plane and one that wasn’t.

What’s more, the drivers back then sat in open cockpits. They could turn around and look to see where the other boats were located. They were also careful not to be too aggressive in fighting for lanes because, sitting there in the open without so much as a seat belt holding them into their seat, they knew how extremely vulnerable they were. A wrong move could have very real and tragic consequences to themselves and to their fellow drivers.

the craft that attracted the most attention, G-5 Notre Dame. The latter was a replica of the hull built in 1939, but it contained the one-of-a kind 24-cylinder Duesenberg engine that was used in the original boat.

Hello from a fan in Detroit. Regarding the Seattle Fiasco editorial, I’d like to send you a piece I wrote two years ago, inspired by years of watching similar such things. No ill intent, just would like to share a few thoughts with you guys. How many more of these messes are we to suffer through before we say “enough”?

With the multitude of challenges facing Unlimited hydroplane racing, it’s easy for fans and supporters of the sport to wonder what direction we might be heading. Larger concerns such as sponsor involvement, boat counts and viable race sites notwithstanding, here is one suggestion intended to improve the show, lessen safety concerns, and clear up much of the confusion that seems to turn off the casual fan.

To read the rest of this fan's comments and several more, click here... 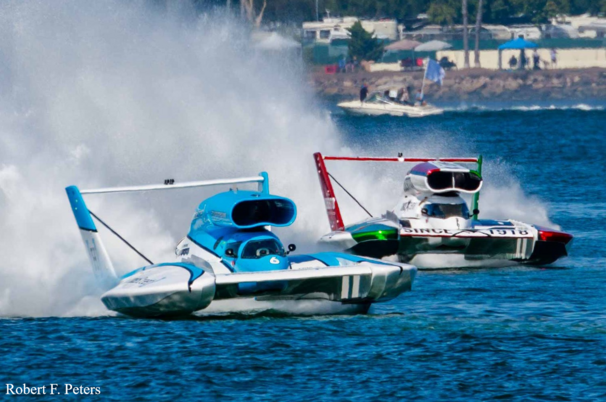 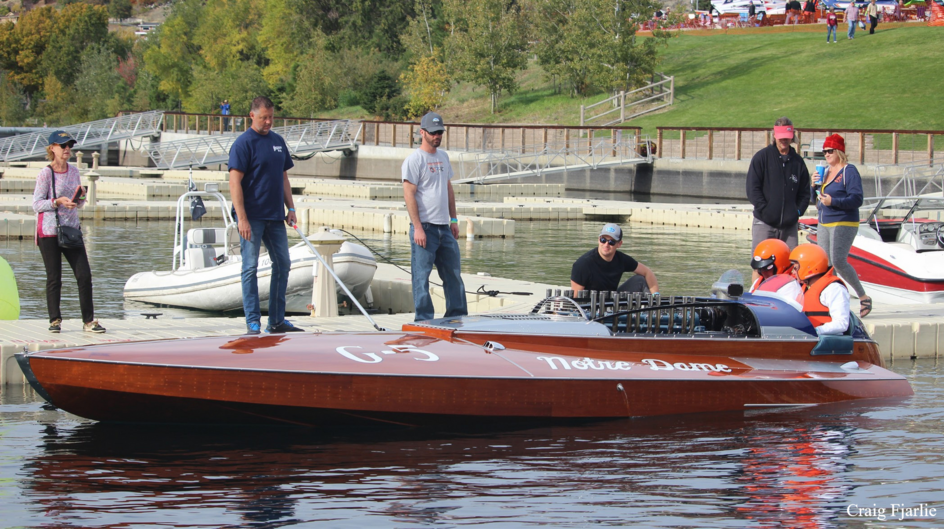 One problem for H1 and that plan, however, was that the U-1918 Oberto Super Salami, with budgeted money from Oberto, would not be invited. When Mike and Lori Jones announced that the U-1 Delta Realtrac would not go to San Diego,
an invitation spot opened for the U-440 Bucket List Racing. Owner Kelly Stocklin declined the invite saying the economics did not justify the trip. The good news for H1 was that now the U-1918 could be the sixth boat.

With a 1,443-points lead over Kelly in the national championship chase, Shane pretty much had the title before the boats hit the water. He clinched his sixth championship by being the fastest qualifier and then by winning the first preliminary heat. It was Kelly who won the final and the Bill Muncey Cup, however, and closed the season with his third win in a row.

Kelly crawls to inside lane and to victory in San Diego.