The latter requires a little clarification. Detroit usually held at least two regattas from the time racing resumed following World War II through 1961. Rather than separating participation in the Detroit Memorial from the Silver Cup, if a driver participated in one or the other that would be sufficient to constitute consecutive years of racing on the Detroit River.

Before we delve into the lists of competitive longevity, Jim Sharkey deserves
thanks for assistance with research used in compiling the documentation.

The majority of Unlimited drivers compete for a half-dozen years. A few may stay on for 10 years or so, but hardly any continue for decades.

RECORDS OF A DIFFERENT SORT

For the complete May issue and all our regular features, click here. 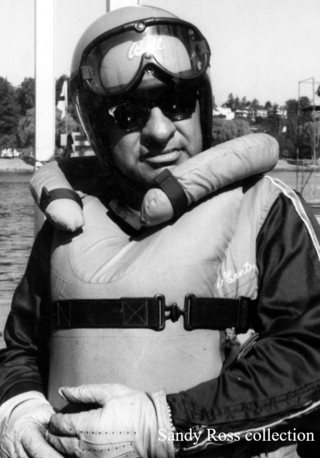 There would be other boats in the field, of course. Another quick look at the history would tell you that Mark Tate and Smokin’ Joe’s was likely to be the strongest challenger. The team had been the runner-up the past two years and, thanks to
Hanauer missing races because of an opened hatch in 1994 and a torn muscle in 1995, Tate was able to win the national driver title the previous two years. 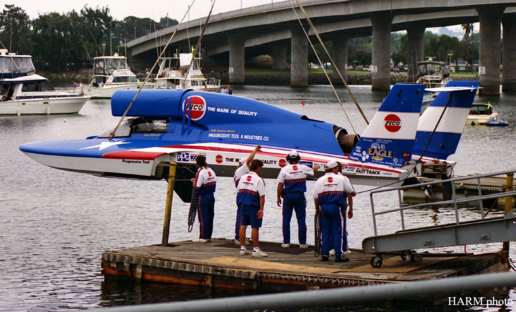 The preseason prognosticators considered
other boats as among those to potentially make the final heat, but likely little more. Those possibilities included the Miss Madison
Racing Team, which had a serious sponsor in DeWalt Tools, Mike Jones’s Miss Exide, or perhaps a boat from Fred Leland’s low-budget outfit. He had two: a new boat named PICO
American Dream and a craft they called “Lucky,” which was built in 1993, won two races
the following year, and finished third in the national standings in 1995. Driving for Leland was Dave Villwock, a wizard at setting up a boat and so far, the winner of three races.

Smokin’ Joe’s was seen as the biggest threat to the dominance of Budweiser.

As the unlimited hydroplanes gathered near Phoenix for the first race of the 1996 campaign, there was little doubt among the experts how things would turn out in the end. A glance at the immediate past was enough to see that the winner was likely to be Chip Hanauer and the Miss Budweiser. Bernie Little’s Beer Boat had won each of the last five national championships, after all, and he added a new boat to his fleet in 1996—the Miss Budweiser that would be known as T-5.

A look back at hydro history.

The American Power Boat Association was created in 1903, making powerboat racing one of the oldest forms of motorsports in America. With our focus on the largest and fastest boats in the world, and with that long history, we have an excuse once a year to take a look back at some of the events that happened 25, 50, 75, and 100 years ago.

Most ardent observers of hydroplane racing are familiar with annual awards for boat and driver championships. They are traditional honors given for the boat and driver who score the most points during the course of a season.

After reviewing a variety of other statistics, it becomes obvious that some drivers have earned a special place in the historical record. There are no awards for these achievements, but they are noteworthy just the same. 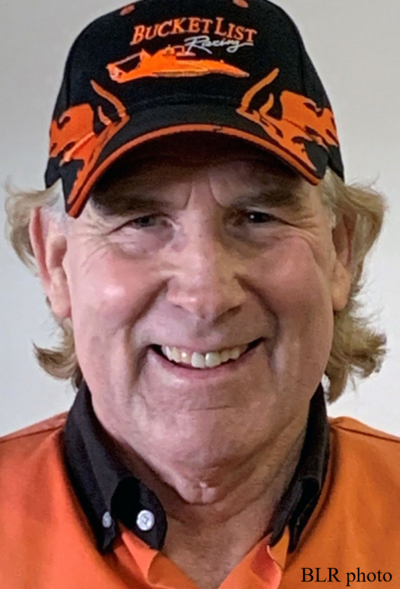 The PICO American Dream at the 1996 Bayfair Bill Muncey Cup in San Diego. 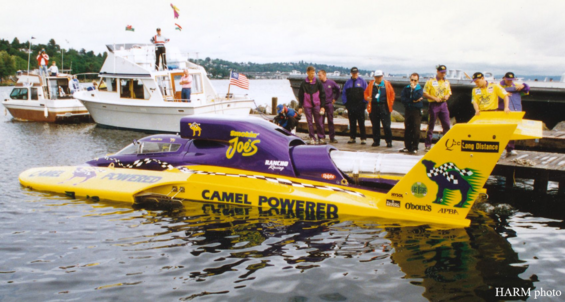 The most successful Unlimited hydroplane driver in the history of the sport will return to the cockpit this summer. Dave Villwock will handle the controls of a yet-to-be-named boat that was purchased by Sharon and Kelly Stocklin’s Bucket List Racing Team last year. The boat previously raced for Go Fast, Turn Left Racing.

The Stocklins said they are thrilled with the prospect of Villwock driving their boat. “We have worked with Dave for many years and had great success in the flatbottom classes and could not be more excited to have him drive our new boat in the upcoming season,” they said.

“I am grateful to have been given the opportunity to drive for Kelly and Sharon this season,” Villwock said. “We have made a lot of improvements to the boat and program as a whole. Our team looks forward to energizing the sport by announcing a new sponsorship for our new hull in the coming weeks.”

Villwock returns to driving after five seasons away from the cockpit. His first Unlimited ride came in 1990 when he drove William Bennett’s Miss Circus Circus. In 1992, he drove the new Coor’s Dry  for Ron Jones, Jr., and at San Diego that year won his first race.