UNJ:After the 1970 season, did you know you were going to have the Pay ‘n Pak ride the following year?

Schumacher:I have a shortness of memory when it comes to 1971. I don’t know if I raced.

Yes, you won the last few races.
Oh, that was with Pay ‘n Pak.

And in ’72 you raced until Madison and quit because of the debris in the water.

But in ’71, Jim Lucero was crew chief. How was he for you to work with?
Fabulous.

Yeah?
With the Bardahl I had to watch the manifold pressure constantly. Of course, a lot of that was our high-dome pistons. We built quite a few engines in 1968 and that accounted for a couple of races that I lost, too. Once again, that year my starts weren’t the best and I’ll admit it, but I felt I had a good enough boat to pass anybody anyway. And I did. But we broke
engines because of my pushing the boat harder than I should have, but I felt they were gonna live like they did in ’67, and then unfortunately, they didn’t.

We blew up a few. Mostly manifold pressure, I think, that caused a lot of that. When I got to the Pay ‘n Pak with Jim Lucero, I said, “How much manifold pressure should I look for, and where should I stop?” He said, “Manifold pressure? I don’t want you to even look at the gauge. Just stare at where you’re going and win the race.”

What is the winningest hull in unlimited hydro history?

Not long ago, a follower of this sport on Facebook asked what seemed to be an elementary question:
“What is the winningest individual hull in hydro history? Winged Wonder? Blue Blaster?”

It turns out that getting to the answer requires a deep dive into the obscure world of hydroplane data and brings with it the kind of debate that hydro nuts love to have, and what we love to publish in the Unlimited NewsJournal.

You should know that the most successful hull in hydro history is neither of the two options our questioner proposed, but that’s getting a little ahead of ourselves. Before determining the winningest individual hull in history, two foundational questions first need to be resolved:

What is a boat? What is a race win?

Both questions seem simple enough to answer until you scratch below the surface. When contemplating what is a race, for example, consider the case of Guy Lombardo and his famous Tempo VI.

According to the most common database that tracks hydro hulls, the Tempo VI is credited with a total of 15 race victories during the late-1940s and early-1950s. Some of those wins, such as the 1946 Gold Cup and 1948 Detroit Memorial, certainly belong in the boat’s tally. But, what about events such as the 1949 Maryland Sweepstakes Regatta in
Baltimore or the 1953 Marine Festival Free-For-All in Long Beach, New York?

I’m sure Lombardo treasured the trophies that he earned at those two events, but for the purposes of this study, both would not count as a race victory. The rule book says that for a race to count as a race there must be at least three starters. Being one of the nation’s best-known band leaders at the time, Lombardo was no doubt in high demand to make personal appearances at boat racing events, but many of those included only his or maybe one other Gold Cup–class or Unlimited boat.

So, while the total for Tempo VI might appear to be 15 race victories, it was actually only seven, and that’s including the
boat’s victory in the 1939 Gold Cup while it was named My Sin. (My Sin also won the 1941 Gold Cup, but it was the only starter, so again—no race.)

What is a boat? Scratching below the surface some more uncovers the example of the Miss Budweiser that is commonly identified as the T-3. The hull was originally built in 1989 and accumulated a total of 15 race victories through the 1994 season. Then, it was rebuilt—extensively. So extensively that when the boat appeared the following season, only some of its sponson parts remained. Most importantly, the hull’s entire center section had been replaced.

The T-3 Budweiser went on to win another 18 races in its rebuilt form, which combined with its previous victories would give it a total of 33 and make it the winningest hull in the sport’s history. But those who keep careful track of such things
argue that when the center section of a boat is replaced, it’s considered a new boat.                         Continued, click here...

For the complete March issue and all our regular features, click here. 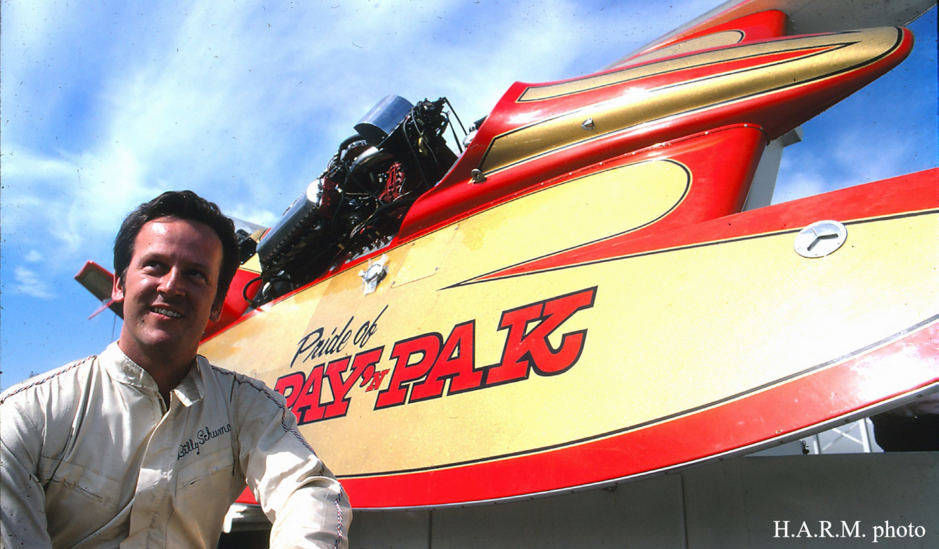 Last month, in part two of our interview with Billy Schumacher, the champion boat racer discussed his move into the unlimited class driving Cutie Radio, Miss Tool Crib, $ Bill, Miss Bardahl, and Parco’s O-Ring Miss. In part three, Schumacher talks about driving Pride of Pay ‘n Pak, his time competing in tunnel outboard marathon races, his involvement in the U-95 project, and his return to the unlimited class aboard Valu-Mart. The interview was conducted on May 29, 2019, by Craig Fjarlie.