The 2020 H1 Unlimited season has lost another race with the announcement that the event in Seattle has been postponed until next summer. Seafair organizers said the race was postponed because of uncertainty surrounding public health safety combined with guidance from local and state governments.

The fate of the HAPO Columbia Cup in the Tri-Cities is expected to be announced soon and there is no word yet regarding the event in San Diego, which is scheduled for mid-September.

Seafair officials announced that the Unlimited race was only one of the events canceled by the organization this summer. The
Fourth of July fireworks show, the Milk Carton Derby, the Seafair Triathlon, the Boeing Airshow, the Torchlight Parade, and many
other community events also were canceled. Seafair said the U.S. Navy Blue Angels have already confirmed that they will perform in Seattle on August 6 to 8, 2021.

Colorful Indy racer Andy Granatelli later owned the Novi Special from 1961 until 1966. Design and engineering improvements among Indy cars soon made the car obsolete and it was donated to the City of Novi.

Along came the late Ron Watson, then mayor of Novi, who along with others conceived the idea that all motorsports needed a great Hall of Fame. That old Novi Special race car became the centerpiece that started the idea of the Motorsports Hall of Fame
of America. The organizers worked tirelessly to make their dream become a reality, and in doing so built an institution that has earned respect the world over.

Seattle race is postponed until the summer of 2021.

Bob Best’s Special Edition, which was designed by Ron Jones. 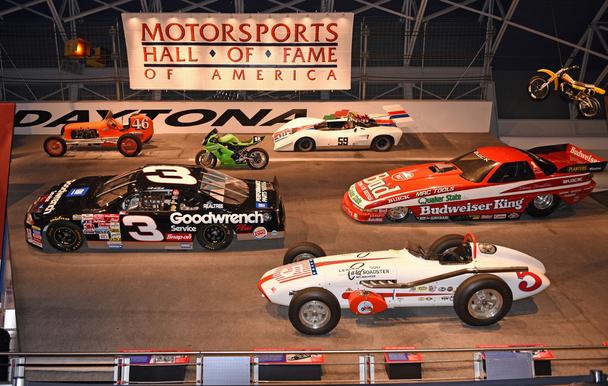 The Motorsports Hall of Fame of America currently inducts someone from the powerboat category every five years.

UNJ: Mr. Dollar, I suppose you grew up over at Tahoe?

Dollar: That’s right. We bought a summer home at the lake in the ‘20s, the middle ‘20s, and I had a boat called the Dollar, Jr., built by Nice, and it had about 40 horsepower and a round bottom. It was about the world’s fastest boat to me,
a great thrill, you know. Probably went 20 miles per hour. Then I got an outboard, the Stanley Bullet. Had a Quad on it. You didn’t have a rope starter. You had handles
and threw it backwards against the compression. It would bounce back and start. Had a battery ignition on it. It was a fun boat, you know, just racing against the other outboards. The others had fishing boats, so to speak, so because Stanley Bullet
was a racing boat, it wasn’t a great thrill to win. But it was fun to win.

According to information I have, that was at 9 years of age?

Yes, that’s right. And the other boat at the lake was Dollar, Jr . First it was down at Oakland, then I took it up to Tahoe. In that era, we aquaplaned. They didn’t know what water skiing was. And the Dollar, Jr. was a wonderful boat for that. Made a big enough wake to go over and back and forth. Ran all day with a Scripps Ford. It was a good boat for the kids, so to speak.

Due to the current health/regulatory environment, the regattas in Guntersville and Madison, the June Tri-Cities test session,and Seafair for 2020 have been canceled. The cancellations were based on race site perception of what was in the best interest of their communities. H1 Unlimited continues to work with Tri-Cities on their regatta.

The biggest unknown is when Washington state will allow large-group gatherings, and will the timing of relaxing restrictions leave enough time to have successful events. A San Diego regatta is still planned but, being later in the year and pending another governor’s decisions, we are currently focused on the Washington state events. 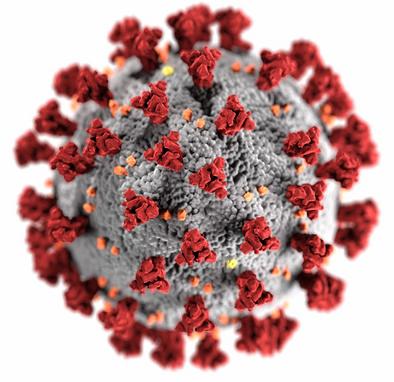 FROM THE UNJ VAULT

Stanley Dollar:
A gem of a boat racer.

For the complete June issue and all our regular features, click here.

The main gallery at the Motorsports Hall of Fame of America in Daytona Beach, Florida.

The Motorsports Hall of Fame of America.

Robert Stanley Dollar, Jr., represents the Golden Age of motorboat racing, those days following World War II before the dawn of commercialism and before sponsors became necessary. Dollar’s boat racing ventures were personally financed, and he did his racing with gentlemanly charm, complete with courtesy and class. Born in 1915, the grandson of Captain Robert Dollar, a lumber baron and founder of the Dollar Steamship Company, young Stan Dollar began his speedboating back when the Elto Quad outboard motor was the thing to own.

After his father purchased an estate known as Wychwood on the north shore of Lake Tahoe in the Sierra Nevada Mountains, there emerged a series of fierce contests called Tahoe Tavern races that primarily featured members of the Dollar family and the family of Henry Kaiser, another West Coast industrialist, Tahoe resident, and speedboat aficionado. As a result of these races, Lake Tahoe soon became the home of a growing collection of second-hand Gold Cup boats. Dollar’s first experience in a “real” Gold Cupper came in 1939 when long-time friends Dan Arena and Danny Foster took their Miss Golden Gate to the lake and Dollar drove it in a contest billed as the Lake Tahoe Championship. For the record, Dollar scored an easy victory over Henry Kaiser’s Lemme Go First and Edwin Oliver’s Hey There.

Stan Dollar’s first official experience in the big boats came when he entered the 1948 Gold Cup in Detroit with an all aluminum and rear-engined craft named Skip-A-Long. A year later he placed second in the Gold Cup and won three events: the Detroit Memorial, the Percy Jones Memorial, and the Harmsworth Trophy. His enthusiasm was dampened when his beloved Skip-A-Long sank in the deep waters of Lake Tahoe before racing got underway in 1950, but he continued to participate, driving the Slo-mo-shun V to victory in the 1952 Gold Cup. His career then wrapped up in 1953 and ’54 behind the wheel of his own Short Snorter. He also at the time introduced the unlimited fleet to competition on Lake Tahoe, where he won the 1953 Mapes Mile High Trophy.

Following a prolonged illness, Dollar passed away in San Francisco on November 17, 1975, at the age of 60. The following interview was conducted by Dave Speer and was originally published in the December 1976 issue of the Unlimited NewsJournal. 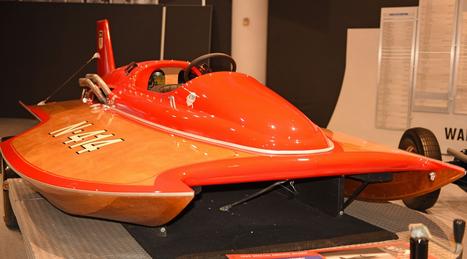 In early 1989, a one-inch item in the back pages of the Seattle Times sports section caught my eye: “Bill Muncey Inducted into the Motorsports Hall of Fame in Novi, Michigan.” Being well aware of Muncey’s hydroplane racing accomplishments, and having never heard of this Hall of Fame, I decided to do some research.

After World War II, Lewis Welch, a resident of Novi, Michigan, a town of about 60,000 people 25 miles northwest
of Detroit, placed a Novi Indy dual overhead-cam engine in an Indianapolis
500 race car called the Novi Special. The
car was driven by Ralph Hepburn, Paul Russo, and Duke Nalon in the 1950s.

“We are deeply disappointed but together we will get through this emergency,” said Eric Corning, the president and CEO of Seafair. “Events will be an important part of our recovery, and we look forward to working with our sponsorship partners, volunteers, and
stakeholders to produce a festival with the Blue Angels, fireworks, pirates, clowns, parades, and all of the neighborhood community events. We will stay active in the community this summer to bring people together to celebrate online and in-person, within COVID-19
guidelines.”

In Grand Prix racing, the Hydroplane Racing League (HRL) announced in April that it has canceled its 2020 season, but the Grand Prix America (GPA) series remains scheduled. Many teams that had planned to race in HRL events have said they will instead compete in GPA events.

In those early days, the ‘20s and ‘30s, how were you exposed to faster boats? When did you become aware of the Gold Cup class?

Mainly, I subscribed to Motor Boating. The Gold Cup was always Indianapolis to me. And I was very fortunate that my father had to go east when Gar Wood raced Kaye Don in that big fiasco in 1932. My father was a good friend of K.T. Keller [head of Chrysler Motors] and actually I’m a good friend of Bob Keller. Bob went to Hill School and so did I. I think K.T. got me into Hill, really. Mr. Keller asked my father if his son, Bob, could be a cadet on a ship to go around the world. My father had all the ships then and he said OK.

During the race at Detroit, K.T. had a yacht anchored in the middle of the course. It was a real highlight of my life to be there. After the race, George Wood took me for a ride around the course in Miss America VII. Actually, Kaye Don had his Miss England II in the Chrysler boat well. The company had it for testing their marine engines. A beautiful facility, right on the course across from Belle Isle.

That’s where the Slo-mos berthed in later years.

The Motorsports Hall of Fame of America relies on donations to continue promoting and preserving the history of power boat racing, and there is more they would like to do. Please consider a donation now of any size at mshf.com. 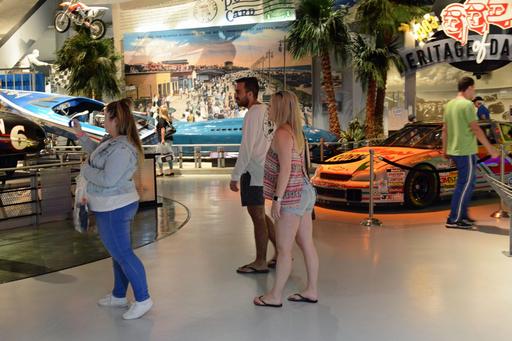 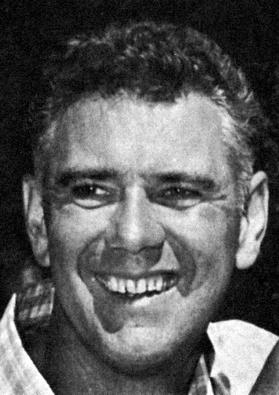 But many of the GPA events were to be held in conjunction with Unlimited-class events. With the cancellation of the H1 Unlimited races in Madison and Seattle, that series has been reduced to three events: Tri-Cities; Owensboro, Kentucky; and San Diego. Organizers of the Owensboro event say they remain optimistic that their August race will be held.

In New Zealand, the organizers of a UIM Grand Prix Hydroplane World Championship scheduled for next year have decided to postpone that event until 2022. “We would like to ensure that there are no barriers that will prevent overseas entries from making the journey to what will be a great event,” they explained in a press release.

Another event falling victim to the pandemic was the annual Wheeling Vintage Raceboat Regatta and Chili Cookoff in Wheeling, West Virginia, an event held on Labor Day weekend that typically attracts 50 restored old raceboats. “This is particularly disappointing for us because, for the first time in our 14-year history, we were expecting a significant group of vintage
hydroplanes from Seattle and the Northwest Washington area,” said Debbie Joseph, co-founder of the event.

Meanwhile, the American Power Boat Association says it will continue to grant sanctions for the remainder of the 2020 season but reminds race organizers that they must pay attention to the local standards for health concerns and other guidelines.

“The racing world is all about managing risk, in whatever form it may come,” said Chris Fairchild, APBA president. “Whether
it be wind, water, and yes—now a pandemic—it’s now all our job to manage those risks and protect our racers, staff, and spectators so we may continue to race for many years to come. We just need to adapt to our current racing conditions.”

Guests touring the museum, which is on the grounds of the Daytona Motor Speedway.