Do you have an opinion as to why Miss Exide crashed at Couer d’Alene?

Because it was running downhill horribly. The shaft hole was drilled in the wrong place. None of the hardware fit, so we had to put the motor farther forward than it was supposed to be. It was out of
balance and they didn’t have time to change it. They knew it was going to happen.

UNJ: When and where were you born?

Peabody: I was born in Bellevue, Washington, May 2, 1979. I’ve lived in Kent my whole life, actually.

So, you’ve known about his racing since the beginning, almost.

Yes, since the very beginning. I grew up going to the races. I’d go over there, or they’d come to the house and pick me up, and we’d head off to the races. When we were in junior high, lots of times I’d go with them. So, I’ve been around it since, man, probably late ‘80s, early ‘90s, I would say. Probably more early ‘90s when I started coming around.

And then he got you involved.

Right, he got me involved.

Yeah, my first race was Scooteney Reservoir [in Eastern
Washington – Ed.] 1998. They gave me the shovel-nose

You raced outboards then for a while before you

Correct. I raced outboards on and off. I had my motor-

cycles that I liked to play with, and I had the boats, so I was

kind of bouncing in and out of the outboard stuff for a while. I did all the stock and mod classes, and then I jumped into the tunnel boats when Mike was doing that with Dean Hobart. Then bought some PRO stuff and did the PRO capsule stuff and that was kind of fun. And then decided that we wanted to have an inboard, so my wife and I bought an inboard. Went inboard racing. That was a lot of fun and we loved it. Had a really good run in the inboard and then kids came along. I slowed down with the inboard, took some time away and all that stuff. I ended up selling my inboard, but then I bought a brand new one. I built a brand new one.

You built it yourself?

Yeah, I built it. I got a kit from Bert Henderson.

What class was that? 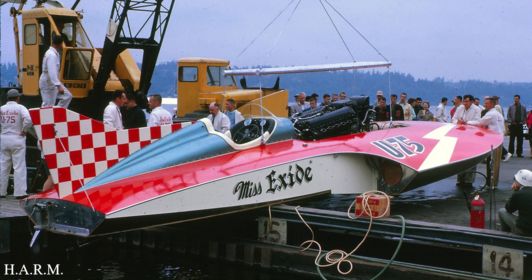 The defending national champion U-1 Delta Realtrac, with Andrew Tate driving, ran nine smooth laps. Of note, this was their first run under the leadership of their new crew chief, Seph Parshall. Owners Mike and Lori Jones both
attended, as well.

J. Michael Kelly took the U-12 Graham Trucking out multiple times and ran a total of 21 laps, the fastest being 156.304 mph. His boat debuted a new color scheme for 2019.

Corey Peabody could not get the igniters to work in the team’s other craft, the U-98 Graham
Trucking American Dream, for most of the day.

UNJ: When was the first encounter with the Unlimiteds?

Ted Jones designed it and your company built it, and Jones supposedly made some innovations such as building the right sponson two inches wider than the left, and some changes to the bottom. Did they help?

The boat always turns to the left, so if you want to build one sponson wider than the other you can do that. If he’s gonna make one wider, it matters how wide they were to start with. You can overdo anything. And whether there’s any advantage to this. I can’t understand why he’d do it. It’s just to be different.

What was your overall impression of the Miss Exide?

Oh, it could’ve been a good boat. Had a lot of mistakes in it. I told Ted it would turn better if we turned it upside down and ran it upside down, ‘cause he wouldn’t put any nontrips on his designs at that time. We’d have more (surface) on a limited hydroplane, now. 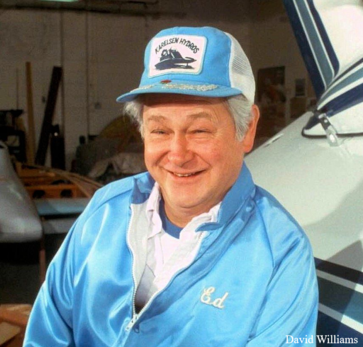 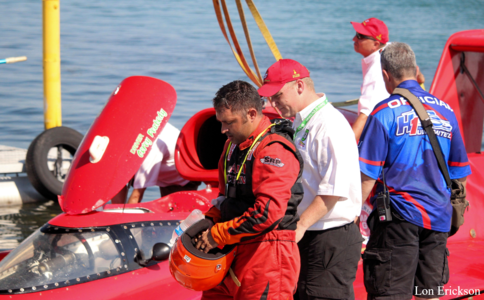 The following interview took place in April 1975, before two of his Unlimiteds were built, and was conducted by Craig Fjarlie as the two sat in Karelsen’s North Seattle boat shop. The interview was first published in the August and September 1975 issues of the Unlimited NewsJournal. . 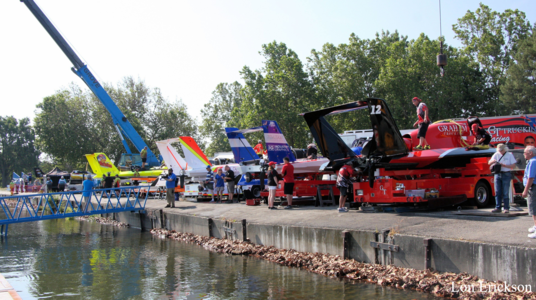 well attended and streamed on SWX TV, a KNDU/NBC affiliate. A temporary fence surrounded the hot pits and APBA membership was available for purchase and required to enter the hot pits. The event was free for fans outside of the hot pits.

Dustin Echols opened the day by taking the 440 Bucket List onto the course. He had to be happy for a brief second or two. He reports that his boat was running 188 mph on the straightaway.

Then, a brand-new fitting failed on an oil line that feeds the gearbox. As a result, two gears inside the gearbox were melted, and there was damage to the engine. When the 440 was brought back to the pits, the team also discovered hull damage to the inner air trap. That was it; they were done for the day.

Tom Thompson took the U-11 J&D’s presented by Reliable Diamond Tool out and soon felt a vibration. He took the boat back to the dock where his team found that a gearbox part needed to be replaced. Problem was, they didn’t have it in their truck, which meant that they, too, were done for the day.

Jimmy Shane took the Miss HomeStreet out several times and ran a total of 21 laps, including one lap of 164.775 mph. The team tried a variety of engine, prop, gearbox, and wing combinations and ran well.

by Chris Tracy and the UNJ Staff

Sunny skies and warm weather welcomed six unlimited hydros to a full day of spring training in
the Tri-Cities, Wash., on May 31. All teams tested and some found the Columbia River down-right testy.

Unlimiteds, vintage unlimiteds, and a GP ran the course. Even though it was Friday and a workday for most people, the testing session was

Ed Karelsen’s first unlimited was the Miss Exide. Built from a design by Ted Jones in 1963, the boat (shown here at its launching) literally came apart while Mira Slovak drove it during its second appearance, the Diamond Cup in Coeur d’Alene, Idaho.

Corey Peabody has driven an unlimited hydroplane in only one race—the 2016 Gold Cup at Detroit. This year he has a new opportunity. He will take the wheel of Rob Graham’s second boat. You may well ask, “Who is Corey Peabody and why was he chosen to drive the U-98?” On June 10, Craig Fjarlie met with Peabody at his construction work site and conducted the following interview. The conversation will help explain Peabody’s racing background and clarify why he is qualified to slide into the cockpit of the Graham Trucking American Dream.

Spring Training
on the Columbia River. 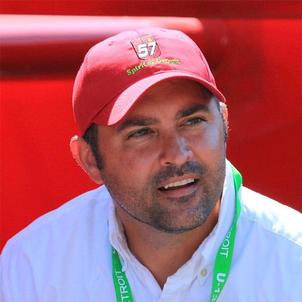 For the complete July issue and all our regular features, click here. 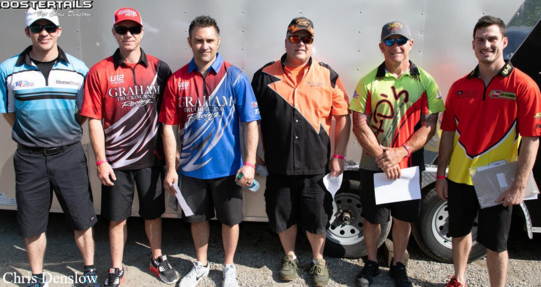 Edward Anthony Karelsen, designer and builder of hydroplanes, was born in Tacoma, Washington, in 1932 and attended the University of Washington College of Engineering for three years. He soon became involved in boat racing and discovered that by building hulls, as well as racing them, he could help finance his education. Karelsen first surfaced in Unlimited circles in 1963 when he built the Miss Exide. He is best known as the creator of a string of hydroplanes in the late 1960s and early 1970s that began with the fifth, and last, Miss Bardahl. In addition to building many outboards and inboards, he is credited with the creation of eight Unlimited-class hydroplanes that won a total of 21 races, including four Gold Cups, and five national championships.
Karelsen passed away on December 29, 2018, at the age of 86. A celebration of his life was held recently at the Hydroplane and Race Boat Museum in Kent, Washington.