He drove the new Such Crust IV at the 1952 Maple Leaf Trophy.

Yeah, that was the boat Bill Cantrell drove. We were going to share driving chores because we were competing against Pepsi. She was an exceptionally good starter with Chuck Thompson driving, and if he got out in front you had to follow his wash. Going into those turns, you really worked yourself to pieces. Cantrell drove the first heat; I was to drive the second. We had a special Allison engine, a G-3. We got it from Horace Dodge. It was single-stage, two-speed, similar to the Rolls-Royce, which had two stages and speeds. This Allison had a gear change where you could put it in a higher blower ratio.

When he made his acceptance speech, Shane commented how often inductees in other categories thanked family members for their support and encouragement. “Boat racing is a family activity,” he remarked. The truth of what he said was clearly evident in his family that evening, when his mother, Robin Shane, was presented with the Don Allen, Sr., Memorial Leadership Award.

From the earliest days of competing for the Gold Cup, family ties have been evident in Unlimited hydroplane racing. Sometimes the ties were from one generation to the next. In other cases, siblings pursued speed on water, usually in competition with each other, but occasionally as participants on the same team.

Boat racing can provide a variety of opportunities for family members to carve their personal niche. Some are owners, others are drivers, some build boats, and others work on crews making technological advances. Some become officials, others do promotional duties and recruit sponsors.

Clearly, there is plenty of work to be done and members of some families have had experience in a number of positions.

The It’s In the Family series will look at the way family ties have connected generations of racers. The initial segment,
which follows, will examine the linkage when the first family member to venture into boat racing did so as an owner. The second segment will look at drivers and their descendants, and the third segment will focus on crew members, boat builders, officials, and promoters.

A few people, whose families stayed involved for decades, will be mentioned in each segment, while others will come
and go in rather short order.

Before we dive into the material, many thanks to Jim Sharkey for suggesting the idea and assisting with names of those
who fit in the various categories.

The overall point of the series is that boat racing can offer involvement and enjoyment for families in a variety of ways. Sure, one can cheer from the beach, but getting one’s hands dirty—literally or figuratively—increases the feeling of community and belonging. There is a place for everyone who wants to be involved, and when the involvement is among family members, there’s plenty to talk about at the dinner table.

What problems did you encounter with the two-engine concept?

Well, they had a very complicated gearbox and they used to have continual gearbox failures. The gearbox was similar in design to the Pepsi’s . The only thing is that the Pepsi ran with the prop in the water, but the three-pointer, with the erratic prop and shaft setup, had a lot of overspeed and cavitation. The gearbox wasn’t heavy enough to take that. But even the Pepsi had gear troubles.

You had a serious accident in that boat. When did it happen and how seriously were you injured?

It happened in Detroit. We were tuning up and testing several days prior to the Silver Cup. I broke my

For the complete January issue and all our regular features, click here. 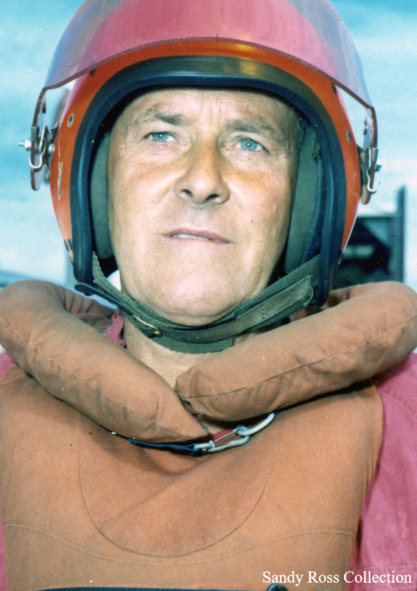 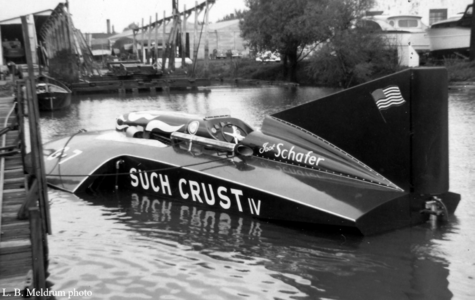 Roy Duby was a superb mechanic who gained a reputation as an innovator. He also had a lengthy career as an Unlimited driver, having seen action in more than a dozen different hulls from 1951 to 1967. He is best known, however, as the 200-miles-per-hour man, a title that he earned in April 1962 when he became the first person to drive an Unlimited hydroplane through a measured mile at greater than 200 mph. His achievement at the wheel of the Miss U.S. 1 stood as the world straightaway speed record for nearly 38 years.

Duby was born in Minneapolis in 1911 to parents of Norwegian heritage and, after living in Canada for a few
years, they settled in Detroit in 1924. He became interested in competition while still a youngster and recalled watching
Gar Wood race on the Detroit River. He called the Motor City his home until the mid-1960s, when he and his wife, Opal, moved to the Florida Keys. He passed away there at Key Largo, Florida, on March 4, 1999, at the age of 87.

The following interview was conducted by Bill Osborne and Craig Fjarlie during an event at Miami Marine Stadium and was originally published in the July and August 1976 issues of the Unlimited NewsJournal.

Dan Arena built Gold’n Crust. What was your opinion of the design?

Well, he had a good design, I believe. After all, it was his design that I ran the mile record with.

The Gold’n Crust was never noted for being an exceptionally good boat. Do you know what he was trying to do with the design?

The non-trip on the side of the hull was a really deep angle from the time it left the sponson to the transom. It had a real narrow-gauge transom, more like the limited boats. And it had a lot of crown on the deck.

The next boat you were involved with was the U-111 Such Crust III in 1952. You helped with the actual construction, didn’t you?

Yes, I did. I was in on the final construction before the deck was installed. I helped put in the under-deck fixtures like the gas tanks. It was finished in February or March—it was still winter—and they brought it down here to Miami. Al Fallon had his Miss Great Lakes II, and they ran an exhibition. I think it was over at Baker’s Hollow where we once ran the limiteds. This is where the Crust first got wet.

There are conflicting reports over who designed the hull. Who did design it?

Les Staudacher. It was built in Kawkawlin, Michigan. It was Jack Schafer’s idea. I guess he’d been watching the two engined Miss Pepsi that ran so well and he came up with the idea. It was the first twin-engined three-pointer.

neck, dislocated both shoulders, and broke every rib in my rib cage. And I tore ligaments in one leg. I was in traction for about six weeks before they pronounced me ready for a cast. The full-body cast stayed on six more weeks. Then I went into a brace. I was out of circulation for a year with that one. I didn’t get back into any Unlimited until 1954, although I did drive several limited in 1953.

Prior to the accident, you drove the G-7 Such Crust IV in the 1952 Maple Leaf.

IT’S IN THE FAMILY

Roy Duby’s first ride in an Unlimited came aboard Jack Schafer’s Gold’n Crust in 1951. He’s shown here at the Gold Cup in Seattle. 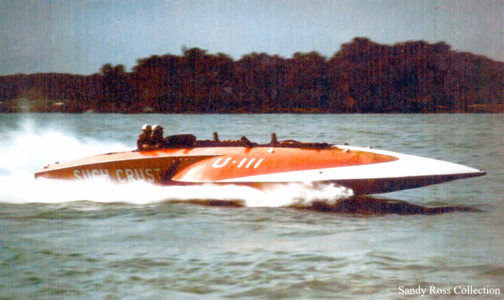 UNJ: How did you get your start?

Duby: It was through Danny Foster. We’d known each other for years racing midget cars. In 1950, we were doing boat
installations. We built several race boats. Then, the next year, when Dan Arena and Jack Schafer split, I took over the boat Arena had driven. Foster was driving Schafer’s other boat.

So, your first ride was in Gold’n Crust in 1951. That boat was powered by a Rolls-Royce Merlin. How did your engine setup compare with the Rolls of today?

Both of Schafer’s boats that year had Merlins. Of course, we didn’t have as good engines as they have now. The Korean War was going on, so all of the Dash-9 models were called back into service. The engines we had were weaker. They were the early models. We had a Rolls 68, which was the first two-stage, two-speed blower engine. It resembled the engines they’re using today, but it wasn’t as husky inside.