Last month, in part one of this series, we looked at individuals who entered unlimited hydroplane racing as owners and listed the involvement of family members who followed them into the sport. In part two, we will consider people who made their foray into the world of fast boats as a driver and then had family members who joined in the fun. Next month in part three, we will review people who became involved with the Unlimiteds in a variety of other ways—as boat builders, crew members, officials, or other roles.

His first victory came in early October that year at the Indiana Governor’s Cup in Madison, Indiana, an event that attracted six entries from Detroit. At the controls of Miss U.S. I, Alter finished just a whisker behind Bud Saile in Miss  Wayne in the day’s first heat but was a winner from that point on, taking both remaining heats with an average speed of just 89 mph.

Alter’s second victory, and perhaps his most significant, came in his first outing for the 1957 season, a wind-swept Detroit Memorial that featured an extremely rough Detroit River. It was those conditions, in fact, that made the victory

For the complete February issue and all our regular features, click here.

In the years before World War II, most boats were operated by people who were both owners and drivers. Few participants were exclusively drivers. For that reason, we will limit the focus of this part to the years following the war.

Bill Muncey, the most famous name in unlimited hydroplane racing, drove Miss Great Lakes in 1950 and went on to drive boats such as Miss Thriftway, Miss U.S ., and Atlas Van Lines. Following his death in Acapulco in 1981, his wife, Fran, picked up the reins as an owner and kept the Muncey name in the forefront of racing action. His oldest son, Wil Muncey, began driving in 1982 and participated for three years in second-rate equipment.

AROUND THE CIRCUIT
Race Site News by Chris Tracy 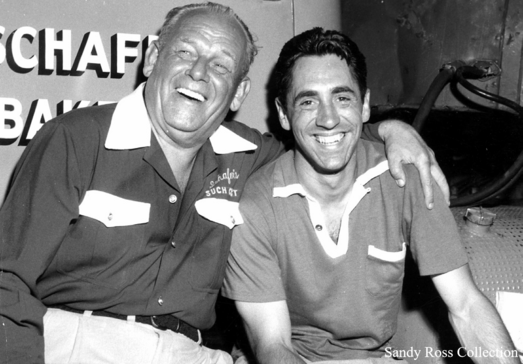 PICO American Dream, won the Kelowna, B.C. race the following year, and was injured at Detroit in 2003 while driving
Llumar Window Film.

Norm Evans’ other son, Mitch, moved into the Unlimited ranks in 1985, driving KISW/Miss Rock. He drove Ed Cooper’s piston-powered U-3 under a variety of names, including Cooper’s Express and Miss DOC. Cooper had a new boat built in 1997, again with Allison power. Mitch Evans moved to the Appian Jeronimo in 1998 but returned to Cooper’s team in 2000. He won the Gold Cup in 2003 when the boat was named Miss Fox Hills Chrysler Jeep. 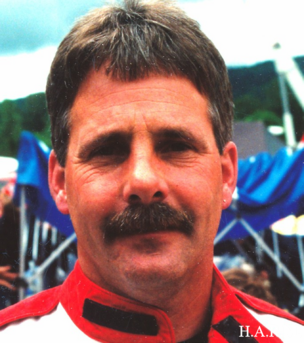 Bill Muncey (left) was among the greatest competitors the sport has ever seen. His eldest son, Wil (right), saw action as an Unlimited driver from 1982 to 1987. 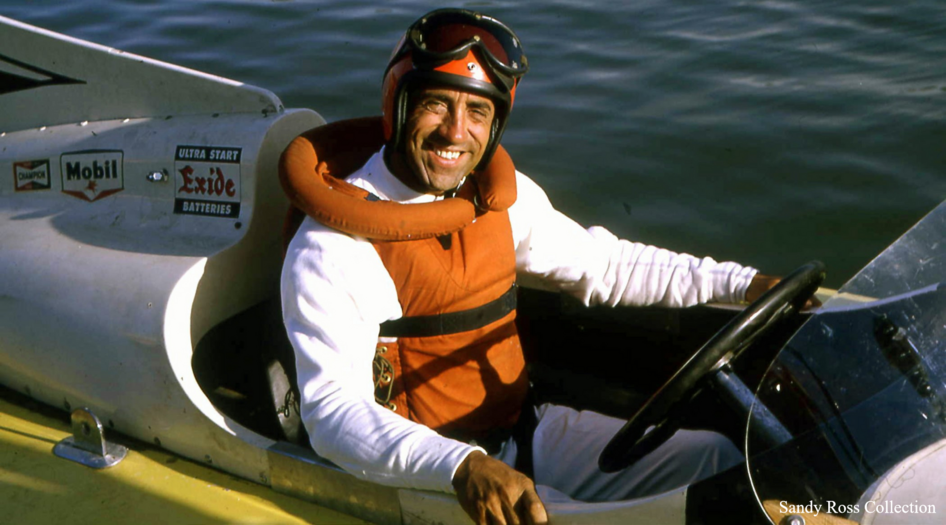 IT’S IN THE FAMILY

Bill Brow took the helm of Miss Burien in 1958. He became the driver of Miss Exide in 1964 and won the Diamond Cup that year and again in 1965. Brow took over the cockpit of Miss Budweiser, a new boat pressed into action after the tragic 1966 President’s Cup. He was killed at Tampa, Florida, the first race of 1967, when the boat flipped.

His son Doug started driving Unlimiteds in 1996 aboard Computers and Applications. He drove other boats including Miss Exide in 2001. Brow served H1 as chief referee in 2018.

Evans had two sons who also drove
Unlimiteds. Mark Evans made his entry
in 1979 aboard Evergreen Roofing and had a significantly better ride in 1991 in
American Spirit. He later drove Miss Well- ness Plan, then took over Miss Budweiser
in 1996 after Chip Hanauer was injured.
Evans won the San Diego race that year.
In 1997, Mark Evans became the driver of 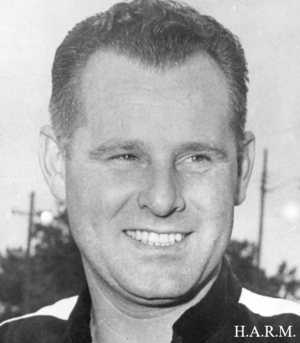 Alter’s success in the 1955 Silver Cup was
enough to catch the eye of two of the top team
owners in Detroit: Jack Schafer, the owner of the
Such Crust line of hydroplanes, and George Simon,
the owner of the Miss U.S. boats. Driving for those
two, Alter would stay busy for the next three seasons.

In 1956 and ‘57, he saw action in both Such
Crust III and a pair of Miss U.S. I boats. His first podium finish was a third-place effort aboard Such
Crust III at the 1956 International Boundary event in St. Clair, Michigan, and he placed second at the
1956 Rogers Memorial Trophy in Washington, D.C.,
with Miss U.S. I. 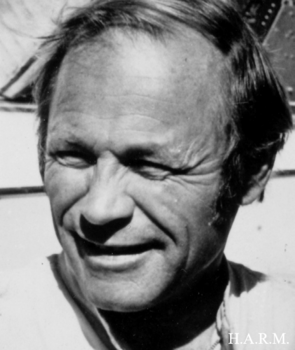 Fred Alter drove the giant twin-engined Such Crust III to victory in the 1957 Detroit Memorial. 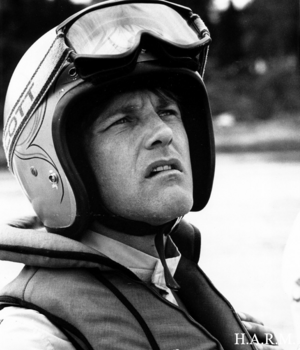 Fred Alter enjoys a laugh with Jack Schafer, the owner of the Such Crust boats.

possible, as Alter was at the controls of Such Crust III, a monstrous blue and white craft—35 feet long, weighing 10,000 pounds, and with twin Allison engines—that could cut through the ocean-like waves as though it was the Queen Mary.

Twelve boats attended, all from Detroit and other eastern locations, but only nine competed, and that number quickly
dwindled as a result of the heavy seas and winds that gusted to 28 mph.

Fred Alter rarely earned a spot in the winner’s circle, but he made a significant mark on the sport of unlimited hydroplane racing, nevertheless. Always living life to its fullest and known for his lead foot, which earned him the nickname “Fearless Freddie,” he spent parts of 21 seasons driving the big boats, sat in the cockpit of more hulls than anyone else in the modern history of the sport, was an owner for two years, served as the commissioner of the sport for three, and was inducted into both the Unlimited Hall of Fame (1983) and the Michigan Motor Sports Hall of Fame (2013).

Alter passed away in Palm Beach, Florida, on January 9 at 94 years of age. Some believe he may have been the last surviving driver from the Golden Age of unlimited hydroplane racing.

Born in Detroit, Alter had a passion for boat racing that was stimulated by hanging around Kean’s Harbor, where the race boats were. He raced sailboats on the Detroit River and then graduated to small limited-class hydros such as his 48-cublic-inch class boat named Fancy Pants. He remained active in local limited races well into the 1950s.

He also got involved as a crew member on some Detroit Unlimited-class entries. He was on the team when Bob Harvey entered his Fickle Eye IV in the 1949 Gold Cup and Silver Cup contests. Though the boat failed to start the former and couldn’t finish the latter, Alter was hooked and continued his involvement, eventually becoming a member of the Miss Detroit team at the 1955 Silver Cup.

Bill Stroh, the boat’s owner, had hired Ray Crawford of El Monte, California, to drive in the race. A decorated pilot in World War II, Crawford was an experienced car racer. The year before he had won the five-day, 2,000-mile Carrera Panamericana open road race across Mexico and four months earlier had become the only person in history to drive the entire 12 Hours of Sebring event without relief. Crawford would later become a top Formula 1 competitor and would start three Indianapolis 500 races, finishing fourth in 1958.

But boat racing turned out to be another matter.

The other drivers had expressed their misgivings about Crawford’s lack of experience in a race boat when the drivers’ committee barred him from competing in the Gold Cup three weeks before the Silver Cup, but Stroh hired him anyway.
Then, during the boat’s first preliminary heat, Crawford committed what would become the event’s only incident. He cut too sharply around the buoys in the first turn, nearly collided with the judge’s stand, and was disqualified.

Accounts differ as to whether Crawford voluntarily relinquished his seat after the near accident or whether it was Stroh who had seen enough, but Fred Alter was invited to take the controls the next time out. In his first heat of Unlimited competition, Alter finished a close second place behind Bill Muncey in Miss Thriftway and outpaced both Bill Braden in Miss
Supertest II and that year’s Gold Cup winner Lee Schoenith in Gale V. He couldn’t get the boat to start for the final heat, however.