When historians look back at the 2019 H1 Unlimited Racing Series, they are likely to see the campaign from three different perspectives. They might see it as a year when Jimmy Shane and the Miss HomeStreet were dominant, or they might be impressed by the fact that J. Michael Kelly and the Graham Trucking ended the year with three straight victories, or they might see that with only five events on the schedule and with some controversial calls by officials, the sport is still struggling to gain a footing with its fans.

All three viewpoints would be correct.

Shane and the Miss HomeStreet were clearly the class of the 2019 field. Shane won his sixth national championship in  he past seven years and his race team collected its ninth national title in the past 12 seasons. The Miss HomeStreet was the fastest qualifier at every event and won 19 of the 23 heats that it entered during the season. But, three of those four heat losses came during the final winner-take-all heats of the last three races of the season.

That’s where J. Michael Kelly and the Graham Trucking team entered in. They proved that getting the inside lane at the start of the final heat is a fundamental component of their strategy for winning an event’s first-place trophy. Using good
fortune, a controversial call by the officials, and taking full advantage of a rule change, they pulled off the feat at the Tri Cities, Seattle, and San Diego.

As for the controversies, the 2019 season featured some doozies, perhaps the most long-lasting of which was a head-spinning series of unfortunate decisions at the end of the Seattle race. But, more about that later.

Ever wonder what it’s like to drive an unlimited hydroplane? For me, the very thought of it began in 1967 at the Gold Cup in Seattle.

At the tender age of 8 years old, I witnessed the violent crash of the U-7 Notre Dame, which nearly took the life of the great Jack Regas.
Weirdly enough, the accident did
not phase me in the least. I vividly 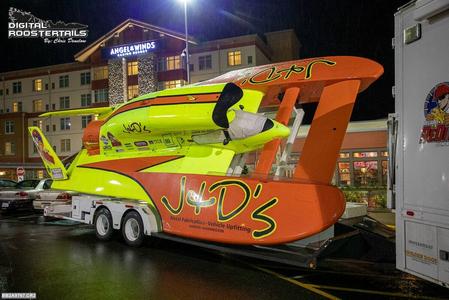 remember telling my horrified parents, “Wow, that was cool! That’s what I want to be when I grow up!”

From that point on I became obsessed with the thunderboats, constantly daydreaming of one day being in the cockpit of a race boat. My persistence finally paid off when I drove my first 280-class inboard hydroplane in 1985 as a member of the Muncey race team. Since then I have had the pleasure of driving 10 different race boats, all being open cockpit inboards. Two of those hulls were in actual competition during the mid to late ‘80s and the others were in the Vintage and Historic
division of the APBA from 2005 to current.

For those who are not familiar with the feel of a hydroplane from the cockpit seat, there are major differences in every hull based on several factors. The first is the era of the actual hull. The oldest boat I have ever driven was round-nosed conventional hull (engine in front of the cockpit) that was built in 1957 with a very narrow transom. The run down the straightaway is similar in all race boats as the hull rides on a cushion of air as it gracefully dances back and forth on the sponsons, however the corners are completely different depending on the age of the hull and who built it.

The 2019 national champion was the U-6 Miss HomeStreet driven by Jimmy Shane.

For the complete December issue and all our regular features, click here.

The H1 Unlimited 2019 Awards Banquet was held on November 16 at the Angel of the Winds Casino and Resort, located about an hour north of Seattle in Arlington, Wash.
Shannon Raney took the lead in organizing the event and even
displayed their team’s U-11 J&D’s presented by Reliable Diamond Tool hydroplane in front of the casino.

The impressive venue recently finished a $60 million expansion and remodel, complete with new restaurants, parking garage, event center, bowling alley, and more. It was a posh venue for the 125 people who attended the banquet.