UNJ: Would you tell us a little bit about when and where you were born and some of your early life experiences?

I started seeing outboards race in different places when I was just 7, 8 years old and was kind of enthusiastic about that. My dad always had a boat. We water skied and were active in different water sports and all. I saw my first Unlimited race at Coeur d’Alene in 1963, the Diamond Cup. I was 10 years old. On my way home I told my parents, “When I grow up, that’s what I want to do.” And I’m sure most of the boys, the male kids that were at the race that day, probably told their parents the same thing on the way home.

But, you know, from that point forward I started washing dogs and mowing lawns, and there were still deposits on pop
bottles in those days that I’d take back to collect money. My dad made me a deal that however much money I came up with
he would match it, you know, gettin’ some equipment to go boat racing. It was not long after that, that I managed to come up with the finances to purchase a used J-Stock hydro. It was actually an A-Stock boat, but we ended up running a J engine on it.

No, not quite old enough for A yet. I think in the day there was a young boy and a young girl in the Seattle area that had all the records in J-Stock and in A-Stock. I think Mike Downing, and I don’t remember the girl’s name, she ran J-Stock. And so, we got the boat and got all the equipment. Got things to where it would run and do what it was supposed to do.

Dad was, you know, being in the Air Force, he had the opinion there’s two kinds of pilots, those that have crashed and those that are gonna crash. So, it was very important to make sure we had all the safety equipment, had a good idea of what the boat was gonna do in all different conditions and how it was gonna work. I lived in the Lynnwood area [north of Seattle]. There’s a little lake up there, it’s called Lake Stickney. We would take the boat up there in the afternoons and evenings after dad would get home from work, and we’d run the thing until dark.

Was he still in the Air Force at that time?

No, at that point he was doing civilian work and was doing heating and air conditioning and electrical work. An electrician. So, when he’d get home from work we’d go run the boat just about every day, it seemed. The deal was that I had to run it one year before we raced it, or one season.

Learn how to drive it.

Learn how to drive it. Learn what it was gonna do. And so once that was accomplished then I started racing J-Stock Hydros. Ended up going through several different changes and things, tryin’ to make the boat better and figure out how to
drive it better. You know, you get beat pretty hard a couple of times and you figure out what they did to beat you and you try to do the same sort of thing and get better the next time around. So, like a lot of races around in those days it seemed like there was a race every weekend some place. 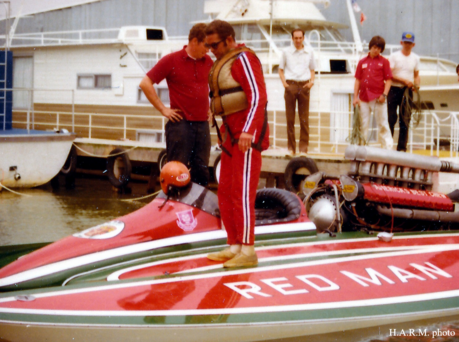 For the complete August issue and all our regular features, click here.

“HONEY, I BOUGHT A HYDROPLANE!”

The rediscovery of the Shanty II

Yeah, there were a lot more then.

Yeah, and we could race everywhere and then do a lot of things without having to travel very far or go very much distance. Did that for a number of years. I experimented a little bit with A-Stock, but for some reason, I was kinda intrigued by B-Stock Hydro. The same boat was legal for all
three classes and so we ended up investing in some B-Stock engines and parts and pieces, and ran that. Learned an awful lot about driving boats and winning and losing.

About that time my grandparents, who lived back in Ohio still, were getting older and kind of struggling with the business and different things and every year, it seemed, we would go back there, spend a little more time. We’d go back for a two week vacation and then it was a month and before
long it was a little longer and eventually we ended up

moving back there. So, really a big transition from racing in Region 10 here to Region 6 back there.

There were still a lot of races, a lot of competitive boats and people. Always people that were willing to help in any way they could. I think that’s part of the fraternity of boat racing. Just everybody is willing to help everybody, whatever it takes,
whether it’s loaning them parts or pieces or showing you how to do things.

You were still running outboards at this time?

Yeah, running a B-Stock outboard in those days.

Scott Pierce passed away in the early hours of July 19, 2020. He was 64. Boat
racing was a major part of his life, from his earliest years until the very end. His father, Laird, owned and campaigned unlimiteds named Parco’s O-Ring Miss. Scott followed his father’s lead and started competing in various inboard classes as soon as he was old enough.

Laird Pierce died young and never saw his son achieve success in the Un-
limited ranks. Scott made the career step to the top class in 1981. He drove a number of boats, most notably Miss Budweiser in 1991. That year he won three races, including Seattle’s Seafair Regatta before a live TV audience, and captured the national high point championship.

Those who knew Pierce remember his friendly, approachable manner. He
made time to greet fans and talk with them. Basically, if you loved boat racing
with the same fervor he did, he would exchange stories and remember you.

So, if you just plunked down $1,200 on a futuristic
looking boat, what is the first thing you would do? 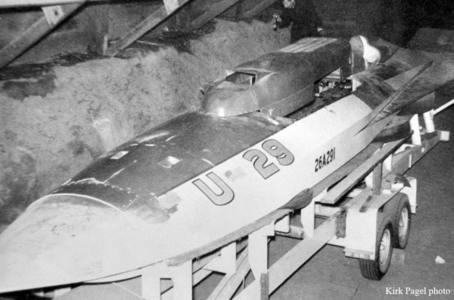 Three classic race boats going for a run on Lake Tahoe.
From the top, the Hurricane IV, the My Sweetie John Francis, and Shanty II. 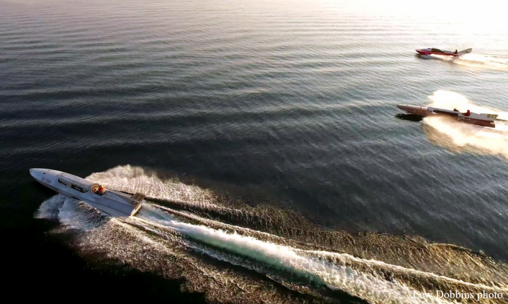 One of the star attractions at last fall’s Mahogany and Merlot classic boat show at Chelan, Washington, was the Shanty II
hydroplane from California. The dramatic aluminum race boat quickly attracted a crowd because it is so unusual.

But so is the story of how Steve Wilkie and his boss acquired it 23 years ago. At the time, they had never heard of the Shanty II

and knew nothing about hydroplanes. So, when they made the impulsive decision to buy it,
they didn’t tell their families. Not even their wives.

At first, Wilkie thought it must be an abandoned salt flats race car. “Quite frankly, we didn’t know what it was,” he says. “It was dirty and full of oak leaves and lying underneath this tree. We looked it over and laughed. We know how to build stuff like that and we both realized there was no way you could build this thing in a garage.”

He would discover later that they were staring at an incredibly expensive hydroplane. But at that moment, neither of them knew what a hydroplane was. Puzzled and intrigued, they immediately set out in search of the owner.

Wilkie says they entered Jay’s Towing Company in nearby Cortland, California, and asked, “Do you know anything about
this aluminum boat back here?”

Jay, the guy sitting behind the counter said, “Yea, it’s mine.”

“Well, what is it? What’s the history on this thing?”

“I have no idea,” he answered. “I bought it at a lien sale, but I’m going to cut it up for scrap aluminum. I’ve just been too lazy to go out there and do it .”

To the man behind the counter, this odd-looking boat was nothing more than a giant beer can, so Paveo and Wilkie put their brains together and questions poured out. “What is it? What will we do with it if we buy it? And when our wives find out, aren’t they going to kill us?”

“You don’t even know how much the guy wants,” Paveo responded. 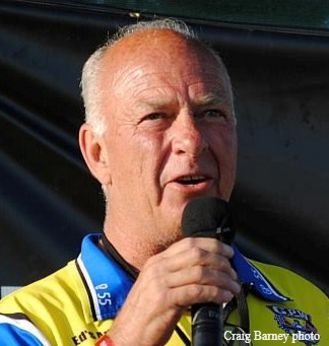 John Walters is perhaps best remembered as the driver of the turbine-powered Pay ‘n Pak and as the first in history to win a race in the cockpit of a turbine-powered boat. But his career goes much deeper than his time in the driver’s seat. Walters has spent most of his life around race boats. He started in outboards then moved on to limited inboards. During that time, he learned how to build hulls using a variety of materials and gained a reputation as someone who clearly possesses an ability to focus on details and has a skill for doing a job right the first time. Before and after his days as a driver, he worked on a variety of crews, sometimes in the role of crew chief and sometimes as a mechanical specialist. He currently works in the H1 tech truck, watching for rule violations after every heat. In this, the first of a three-part interview conducted by Craig Fjarlie, Walters discusses how he got involved in this sport. 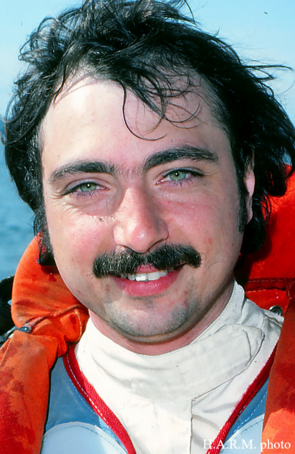 That said, Pierce approached racing with intensity. He wanted to win, there was never any question about that. While he pursued victory every time he climbed in the cockpit, he was a clean driver who avoided placing himself or his rivals in
dangerous situations.

When Pierce retired from driving, he remained close to racing. He started a business and was capable of doing color commentary for race broadcasts. Later, he participated in the Grand Prix hydro ranks as an owner. His drivers included
Kevin Eacret and Jamie Nilsen.

Pierce’s experience as a driver helped him select the best talent for his GP boat. Nilsen won at San Diego in 2019, the final race of the season and by coincidence, the last race Pierce would attend.

Scott Pierce was a credit to the sport he loved. He was a top ambassador for water racing’s greatest show and earned
a place in its historical record. His passing leaves an empty space in the hearts of those who knew him.

We will miss you, Scott. Thanks for being part of our lives.

The story began one warm afternoon in 1997. California businessman Mike Paveo and aircraft mechanic Steve Wilkie had set down their tools at Paveo’s Clarksburg Air Repair to go for a flight. It was not unusual for them to take a low-flying joyride over the sun-soaked Sacramento River to test an airplane. But on this day, they saw sunlight reflecting from a large shiny object resting beneath an old oak tree.

For the next few months, while conducting various test flights, they continued to study the object from the air. Finally, Paveo couldn’t stand it any longer. He and his daughter Anna took a bicycle trip to investigate. Spotting it along the quiet
riverbank, they coasted to a stop and stood in front of it. What they discovered was more surprising than a Sacramento snowstorm.

A few days later, Paveo drove his pickup to the site with Wilkie. They were both dumbfounded. Tucked beneath that large tree, smothered by many seasons of broken twigs and leaves, was an alien-looking rocket ship. The cockpit was empty, and there was no engine. It was little more than an elongated aluminum carcass, bound together by thousands of
carefully pounded rivets. The beast looked otherworldly as it rested quietly on an old rusted trailer.