The field for Guntersville was finalized with the late addition of Rob Graham’s second entry, the U-98 Graham Trucking American Dream driven by Corey Peabody. In addition to the three teams already mentioned, Peabody joined Tom Thompson and the U-11 J&D’s presented by Reliable Diamond Tool and Dustin Echols and the U-440 Bucket List Racing in the pit area. 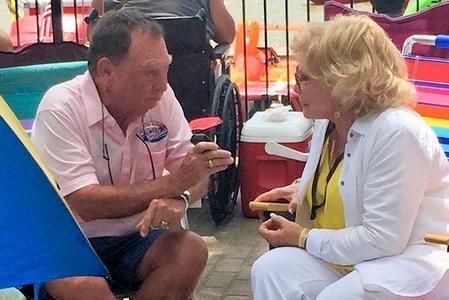 Jimmy Shane drove Miss HomeStreet to victory in the Gold Cup race on the Ohio River in Madison, Indiana. Shane had a perfect race; he was fastest qualifier and then won all four of his preliminary heats before taking the winner-take-all championship final.

Madison regatta officials installed a two-mile course. Many years ago, boats ran beneath the
Ohio River bridge that connects Madison with Milton, Kentucky. Now they turn before they reach
the bridge. The first turn, which is downstream, sits above a sand bar, which can make the water very rough during racing conditions.

Not only did the Madison Regatta host the Gold Cup, it hosted Fran Muncey for the first time in 25 years. The Madison fans gave Muncey a warm welcome as she mingled with the crowd on the river bank and waved to those lining historic Main Street as she served as the grand marshal of the annual regatta parade.

Fran Muncey became the owner of the Atlas Van Lines in 1981 after her husband, Bill, one of the greatest legends in the sport’s history, was killed while driving the boat in Acapulco,
Mexico. She campaigned unlimiteds with the names Atlas Van
Lines, Miller American, and Miss Circus Circus for the next seven seasons and during that time collected 25 race victories.

Jimmy Shane drives the Miss HomeStreet to victory in the final heat
of the APBA Gold Cup. In the background is the U-1 Auxier Marketing
presents Delta Realtrac, the defending Gold Cup champion.

She is currently seventh on the all-time list of winning owners.

Muncey still follows the sport that she and her husband gave so much to years ago. She keeps busy running her restaurant in San Diego and says that running a restaurant is somewhat like running a race boat. There is something always breaking down, something that needs repairing.

When asked about Bill’s desire to keep the team alive if something would ever happen to him, she explained that he wanted Chip Hanauer to take over as driver of the Atlas Van Lines. He recognized that Hanauer was a student of the sport and was passionate about unlimited hydroplane racing. He did not let Bill Muncey down, she says. 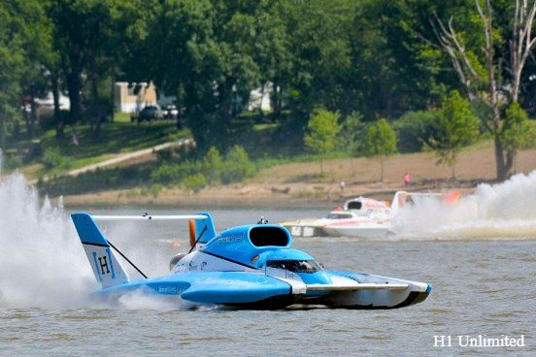 Jimmy Shane and the U-6 Miss HomeStreet lead the Spirit of Detroit around the second turn while on their way to victory in the final heat.

With two races completed in the 2019 H1 Unlimited Racing Series, it’s already clear that Jimmy Shane and the Miss HomeStreet are the class of the field. Shane won both the
season-opening Southern Cup in Guntersville, Alabama, and the APBA Gold Cup in Madison, Indiana.

But, saying Shane was a winner both times downplays the actuality, somewhat. The final results weren’t even close. He had a perfect weekend in Madison (fastest qualifier and the winner of every heat) and would have done the same in
Guntersville except that he jumped the gun at the start of Heat2B.

Another hometown Gold Cup for the Madison Race Team

For the complete August issue and all our regular features, click here. 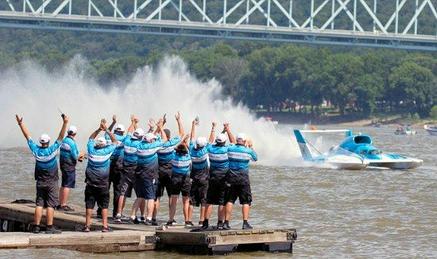 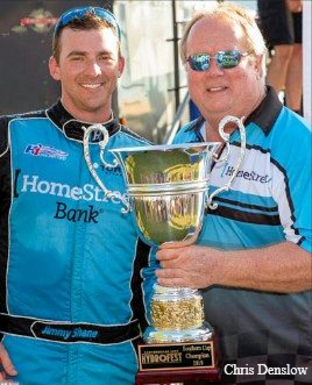 For the second year in a row, the H1 Unlimited Hydroplane circuit began in

Guntersville, Alabama. The 2019 Race for the Southern Cup tookplace June 28

to 30 on beautiful Lake Guntersville. The lake has been proclaimed the South’s

Fastest Water and, by the end of the weekend, it had provided plenty of high

speeds, close competition, and enough intrigue to keep the fans interested.
Adding to the intrigue, the race was conducted under a different race format,

attempted for the first time.

After losing the 2018 Southern Cup by a single boat length at the finish line,

Jimmy Shane and the U-6 Miss HomeStreet found vindication in 2019. Shane and

his Madison, Indiana–based race team would best a six-boat field with a

dominating performance all weekend, culminating in a decisive final heat victory
Sunday afternoon. In short, the Miss HomeStreet was the class of the field in

Guntersville. J. Michael Kelly and the U-12 Graham Trucking would finish in overall
second place, with Bert Henderson finishing third overall behind the wheel of the

U-7 Spirit of Detroit.